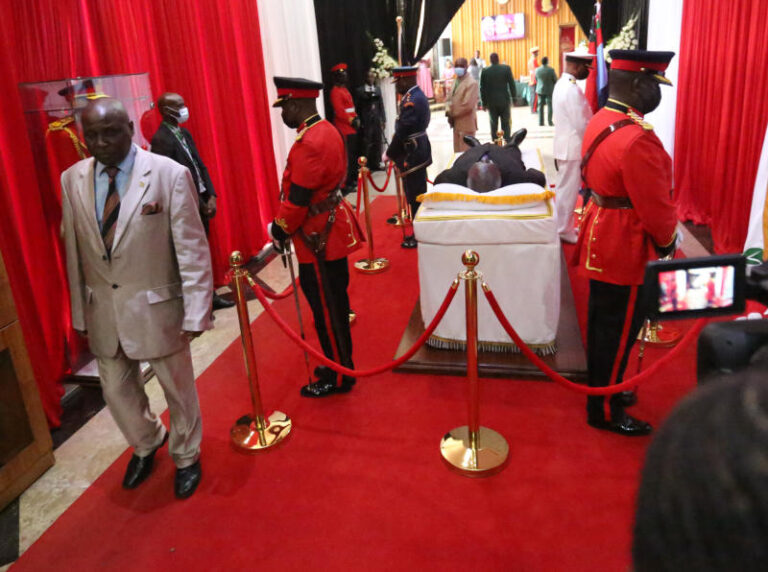 51-year-old David Wambugu was Kibaki’s bodyguard who rescued him after they were involved in a road accident at Machakos junction in 2002.

Wambugu was in the same car with Kibaki when the accident occurred but after elections, VIP protection trained officer was frustrated and unfairly dismissed from the service.

“I was his body guard from 1996 until 2002 when we were involved in an accident. I was shocked because my former boss whom I survived the accident with is gone,” said Wambugu.

After the accident in 2002, he woke up in hospital bed. He was receiving treatment having sustained some injuries on his chest, head and limbs.

To date the once strong officer looks frail with slight limp on his right leg, an injury he picked on the fateful day.

When Kibaki clinched the Presidency, Wambugu said he Kibaki continued paying his hospital bills through the State House for about two years.

At that time, he had been assigned light duties around Kibaki Family.

But things went wrong when some of his bosses discovered he was in touch with Kibaki without following protocol. His communication with the State House was censored.

He said “What pains me the most is how some people felt bad that the President was paying my bills,”

He moved to court in 2016 to sue the state, attorney general, former Nairobi PPO King’ori Mwangi and National Police Service in a matter that is yet to be heard.

Twenty years since the accident, Wambugu’s attempts to access proper medication and even meet justice after several letters to various arms have borne no fruit.

“I have spent millions from one hospital to the next and even sold my property to feed my family and survive,” he said.

Two decades since the accident and now President Kibaki gone Wambugu says nothing has moved.

“I have used millions in hospitals and my children are stuck at home without proper education, my case now rest in President Uhruru, I don’t need sympathy justice to be served,” appealed Wambugu

Designer was not directed to send the racist email claims Chandarana

Shaffie: Sidika’s haga is not plastic